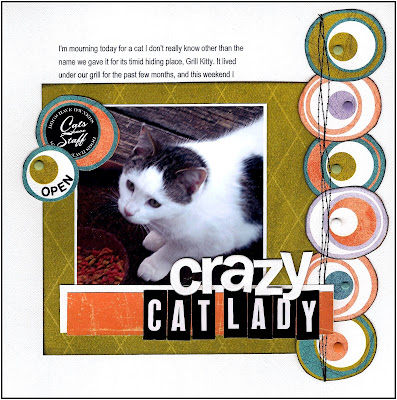 I've been wanting to make a layout about my "crazy cat lady" tendencies for quite some time and the death of one of our stray kitties this weekend prompted me to finally make one. The Green part of the layout opens to reveal partially hidden journaling, which reads:

I'm mourning today for a cat I don't really know other than the name we gave it for its timid hiding place, Grill Kitty. It lived under our grill for the past few months, and this weekend I saw a cat lying in the grass in our backyard. Farzad thinks it froze to death. This craziness of feeding the neighborhood cats began about a year ago, when we bought some Fancy Feast that our cats didn't take a fancy to. We had seen a cat or two hanging out on our deck, and I made the mistake of putting a bowl of that Fancy Feast out for them. Well, soon word spread throughout the neighborhood that there was daily buffet at the Tehrani's. Over time, we've had about a dozen cats visiting, usually no more than about six at a time. We have a few faithful ones that we've actually named, but I've taken care not to name them in a way that will make me want to invite them inside. There's Scary Cat and Funny Baby, our two most loyal visitors. We have Handsome Boy #1 and Handsome Boy #2. There's Bully Cat and Mama Cat and Scruffy Cat, and of course, our dear departed Grill Kitty. It's been a year now, and they come night and day, waiting for us in the morning, peeking through the windows. They come in the rain and they come in the snow. They love their buffet at the Tehrani's. And I hate to admit it, but I love them, too.

Love the LO reminds me of a peacock for some reason. I love the colors.

So sorry to hear about Grill Kitty, but I do love your LO.

And I tagged you on my blog! Read it for details.

aww...what a sweet lo and i can so relate. i just wanna pick up strays as well. sorry to hear about grill kitty but your lo is wonderful and i love your journaling.

Colors of Me said...

You have a wonderful, big heart to feed those sweet furbabies. The layout is gorgeous. Love the details and journaling. So sorry for the loss of Grill Kitty. :(