A Dreamy, Creamy Palette at CCG

Challenge 201 is live at Color Combos Galore and the colors this week are absolutely dreamy! Our Designer's Challenge this week is a new focus--a recipe of sorts. So fun! 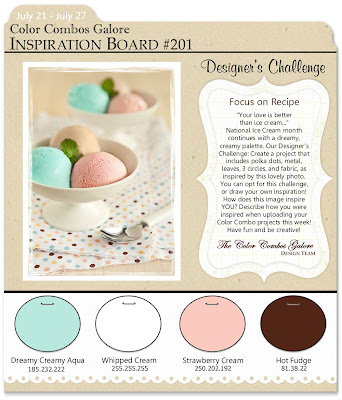 As I always do, I pulled the color swatch onto my computer screen and looked for pictures to use, and I came up with these pictures of my gram and sister with Farzad, and immediately, I thought, "Everybody loves Farzad" and I knew I wanted hearts on my page. I instantly thought of the Object of My Affection kit by Noel Mignon, and to my delight, the colors were perfect. The main papers I used were from Pink Paislee's Cupid collection, which had the pink, aqua, and brown. I used an embossed swiss dot paper by Bazill as my backdrop for the white and the polka dot part of the Designer's Challenge. I used Creative Scrappers Sketch 151 as inspiration for my page design. 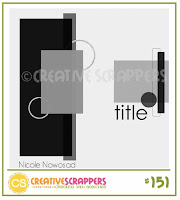 Here's my page. In case you're wondering why the two blocks of blue hearts are a little different, it's because they came from two different sheets. I had two sheets of this paper, and the first one better matched up with the palette so I used that, and when I went to cut the smaller piece, I accidentally used the different sheet. And then I went and accidentally stitched it on sideways. I wondered why I was having a hard time fitting my title on there when I had planned it all out--and then I realized I had stitched the darn thing on sideways. Oh well, no turning back when you've stitched something down! 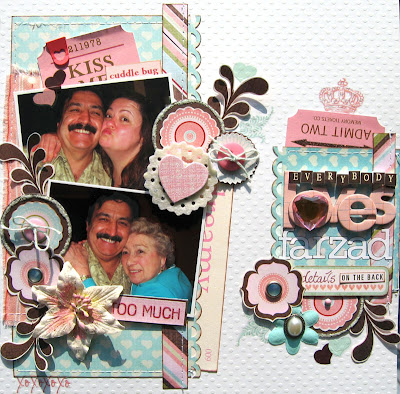 This page is going into my book called "Reasons" (reasons I love Farzad so much). I was going to add white journaling strips with pink writing in the white space at the top, but then I decided I didn't want to cover up the pretty embossed Swiss dots, so I went with journaling on the back of the page, which reads: Everybody loves Farzad. It was love at first sight when my family met him, even though they were apprehensive, considering I was 17 and he was 28. But his warm smile, charm, generosity, and sense of humor instantly won them over. Everyone he meets falls in love with him. He just has this way about him that puts people at ease.He's always positive and cheerful, rarely gets mad.  He's outgoing and easy-going and just that all-around nice guy that everyone likes to be around. Yes, everybody loves Farzad. Especially me.

Here are some details. The center of this flower was a greenish-yellow, which didn't go with the palette, so I grabbed some pink paint and brushed over it. Part of the Designer's Challenge was to use fabric, and as luck would have it, there was some pink fabric in the kit I was using. Another ingredient of the Designer's Challenge "recipe" was to use leaves, and again, my luck was running high because one of the papers in the kit had these dark brown leafy shapes. 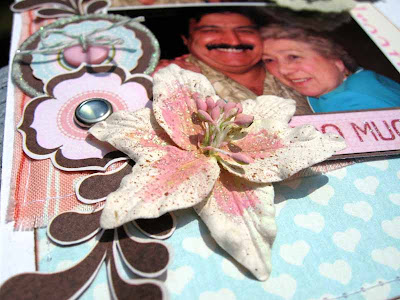 Here's a closeup of my title. I had to really squeeze it on there because of my dumb mistake of sewing on that piece sideways. I plopped that big pink bling heart over the O and then decided I didn't like it, but the darn thing wouldn't come off, so there it stays! My foam adhesive squares were the perfect size for these tiny letter stickers. 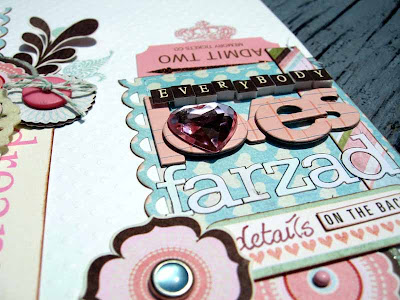 I had used lots of brads for the metal part of the Designer's Challenge, but then I decided that was a cop-out because I always use brads on my layout, so I looked for some "real" metal to use, and I remembered these old Making Memories clips in my stash, and I was delighted to find a pink one with a heart. That striped paper had some bold red stripes in it, and I almost didn't use it because there was no red in the palette, but instead, I trimmed the spots where there was red and pieced the strip back together, overlapping another color on top of the red. Problem solved! 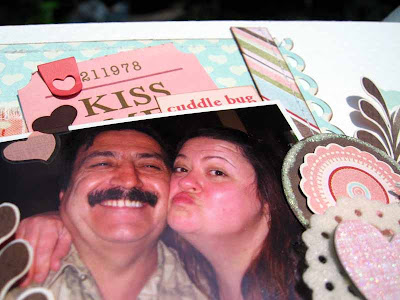 I noticed one of the tear strips said "coordinating pattern on the back" and thought I should use the "on the back" part to indicate my hidden journaling, and this little die-cut tag in the kit was the perfect size to hold that. For the three circle part of the Designer's Challenge, I decided to mount some of the cut-out flowers on a punched brown circle, but I didn't have quite the right size circle to go with the flowers--there was all this extra space, so I added some glitter around the edges. Doesn't show up as pretty in the pictures. 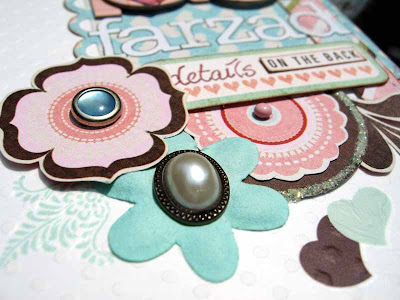 I added some rub-ons to my page. I have TONS of rub-ons, and I always forget to use them, so lately, I've been making a conscious effort to use them more. I love this pink crown that came on a Pink Paislee sheet in the kit. All the rub-ons on this page are from that same sheet. 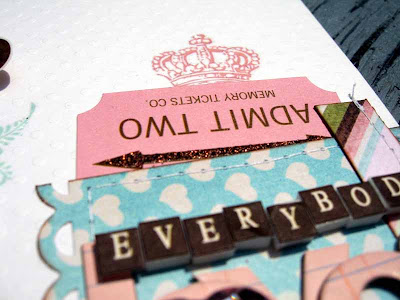 The reveal this week is especially gorgeous, so you should go check out what the rest of the team made. And I hope you'll play along with us! These challenges are so fun!

It's a gorgeous page Debbi!! And that color palatte is yummy!

I also wanted to stop by and say congrats on your SBE pub - love how you used such bright colours with your heritage pic - beautiful!

This is such a beautiful layout Debbi, great take on the sketch and the colours and elements are beautiful. And I just love know it all is on a 8"layout. Need to get cracking and get some more done on this size.

Can sure understand why everybody love Farzad, by your description he's one in a million! Love love love reading your journalling and the how you made your page. Really such a beautiful page and so so many amazing details. Love and hugs, E

What a pretty, upbeat page! Love the sewing and adorable embellies...all put together so well!

Love reading and seeing all the details on your creations, liked the idea of adding the recipe challenge x.

This is gorgeous - love the story - gosh the things we do that others never pick up - if you had't told me about the heart paper & it being sideways I'd never have noticed - but nonetheless it still looks first class!

Debbi,
I really love what you've done with this page. A true source of inspiration! And your explanations are great and answered all the questions I had. I love how you combined both challenges and also all the little bits and pieces you added which make your page such fun to look at and give it all that added interest. Really great!

Amazing layout Debbie! I love all your intricate details..that title is superb..with your heart gem, the everyday box letters...so much variety and interest. How clever of you to remove the red stripe from your paper and to piece it back together again! I also love that you altered the inside of your flower to suit your layout and that heart clip is fab. It sounds like your DH is a keeper...:)
Have a stunning weekend...