A Fond Farewell to HMITM

It is with sadness that I'm announcing that we are posing the final HMITM challenge this week. I have played at this challenge for years, long before I was invited to join the design team. HMITM is one of the longest running scrapbook challenges out there, so it was an extremely hard decision to retire it. In the past year or so, participation in the challenge has dwindled, and so we decided it was time to put HMITM to bed. (I'm refusing to say that we're retiring it completely because I'm secretly hoping that some day we might resurrect it.) 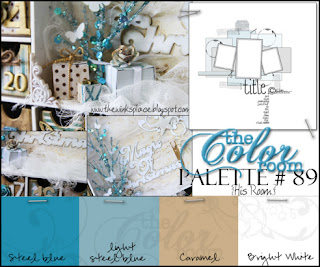 And here's the page I made. I used Lydell's sketch as well as the palette as my jumping off point. (Yikes, I see that my colors are way off now that they're posted right near each other! I had the challenge up on my computer screen and I could've sworn that I was using the right colors!) 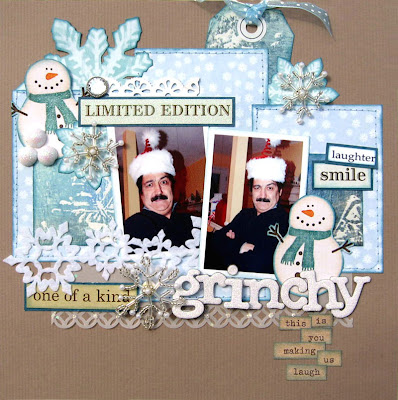 Here are some detail shots. I used some REALLY, REALLY old stuff on this page. The snowflake papers are by Debbie Mumm, Rhonna Farrer, and Sandylion (2005 is the date on that paper). I also used vellum that's been in my stash for nearly a decade. The beaded snowflakes are old Jolee's stickers. I love those and bought a whole bunch of packages so I won't run out! I initially was going to go the lazy route and use glittery Thickers for the glitter part of the challenge but in the end, I felt like a cheat, so I broke out the Stickles and added some glitter to my punched vellum border. 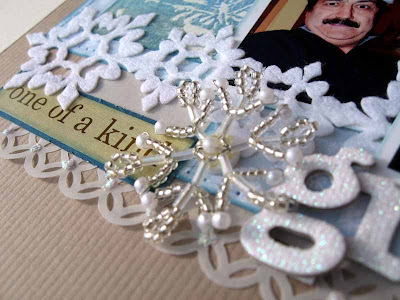 I've had these kraft word stickers by Making Memories in my stash forever and never used them before. I wanted to include journaling but really didn't have anything much to say about these silly photos, and I found some words that worked in this package. 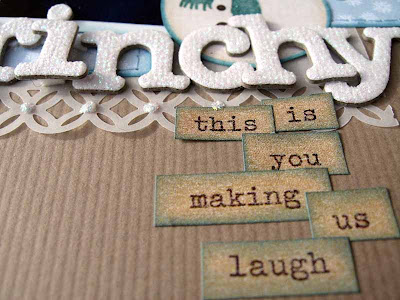 These snowflakes were cut out of an old Rhonna Farrer patterned paper. There are some more sparkles on that "Limited Edition" sticker. 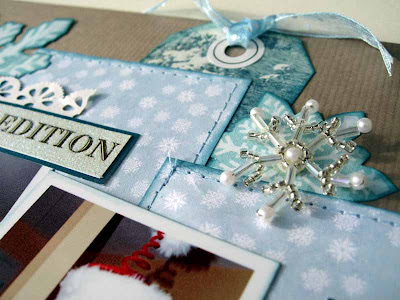 The snowmen are cut from a My Mind's Eye paper that came in a giant paper pad I got a couple of years ago from Michael's. They have sparkly scarves. I was giving my layout a last glance before photographing it and decided it needed a little something else. That something else came in the form of these sparkly domes that I thought looked just like snowballs. 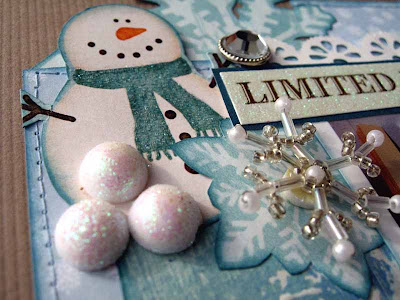 I'm having second thoughts about saying goodbye to HMITM as I'm typing this blog post. :( It really does make me so sad, but I've witnessed it dying a slow death and it just pains me to see the interest continue to dwindle. Thank you for letting me share my sad goodbye. And thank you for stopping by my blog and reading about my layout!

Email ThisBlogThis!Share to TwitterShare to FacebookShare to Pinterest
Labels: Christmas, How Much Is Too Much, Old Stash, Sketches, The Color Room

Oh, that's so cute and wintery! Good job using up some older product--it works perfectly for this page.

I LOVE this layout, Debbi!! Those snowmen are absolutely adorable, and I love that you added that pile of snowballs! IT is so adorable...gonna have to scrapfift it!!! hehehe!! :D

ooooo i love your pages and i can see why they added you to the team. looking forward to your csi blastoff!

I love the little snowmen and their balls lol, I love Mr Grinchy too! Tx

I love this layout! Its so much fun. You have inspired me to find some photos to do this challenge at home. I'm sorry to see HMITM because I have loved all your layouts from that challenge.

Ha ha started giggling the sec I spotted it in the TCR gallery! he really has THE most expressive face, your Grinch certainly is cuter than the green dude! :)) gosh gosh gosh how fabulously you have combined all the different brands, could have fooled me any day that everything is from the one and same collection! Immediately fell in love with the Jolee's snowflakes, and the snowballs! LOVE your page Debbi!! Enjoy your time off school, will soon pull up my sleeve and get down to business. xoxoxox

I just love how you scrapbook, these photos make me smile and well done with the colors!! It's sad that HMITM is closing. That was the first challenge I had ever entered back four years ago!! (dark ages, lol) I won too, on my first try, lol. I will miss HMITM.

This is gorgeous!! You always add such beautiful detail to yur pages!