Sad but true...I'm no longer the Top Soup Chef

There's a new Two Peas in town, and there's lots of uproar over the changes. I miss the "old" Two Peas, but like all things that change, I'm sure I'll get used to it over time. It's a place where I feel at home. I've been hanging out there since July of 2001.


The site was down for quite a lot of hours during the transition, and when I logged on and saw that the whole look was changed, the first thing I discovered was that the Pea Soup appeared to be gone. I eventually found it, in a roundabout way, but to my [pathetic] dismay, the Top Soup Chefs are no longer listed.
I remember a few years back when my name first appeared at the bottom of that Top Soup Chef list I got a little thrill. And then it became a challenge to become the number one Top Soup Chef--and I made it. I even remember a lady named MaryAnn and I were in a sort of race. One day, she'd be the top chef. Then I'd submit a bunch more quotes and I'd show up at the top. Next time I logged on, there would be MaryAnn's name at the top. I guess she eventually gave up because my name had been up there next to that little bowl of soup for quite a while. My lame claim to fame. Ha!
Anyway, I made a layout today to memorialize my reign as the Two Peas Top Soup Chef: 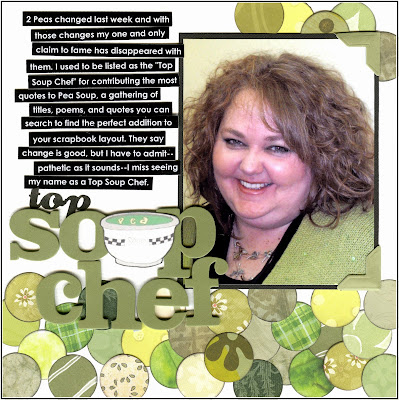 Hi Debbi! I used to get a kick out of seeing your name there too! Maybe they will bring that feature back when they work out the bugs? :)

Change is inevitable, but geez....if it ain't broke, don't fix it, for real.

Great layout and pretty pic of ya!

oh Debbie...you'll always be the top soup chef in my book :)

This is adorable! Love all the different patterns of green peas! This should be published somewhere! :)

Hey, no matter what you can always say you were one! Actually that's a pretty cool claim to fame!

I love the layout!

Very cool use of all those scraps! And great subject to scrap about! Bring back the soup! :)

what a super layout! I am sorry but.. if nothing changed we wouldnt have seen this awesome layout!

It is clearly stated within the dog shock collar evaluations
that as the businesses rising the collars continue to
nice tune their products, they work to develop the correct mixture
between making a stage of comfort for the dog and
creating quick outcomes by way of what is considerably damaging reinforcement to cease mounted barking from taking place.
These breeds are just indicators an oncoming bark.


Take a look at my blog; rage shock collar reviews