My heart has been heavy all day remembering that terrible day. What's really sad is how my fifth grade students seem to have no idea of the profound impact that event had on our country.
I made this two-page layout two years ago, on the fifth anniversary of the September 11 attacks, and I thought I would share it here. I chose this BasicGrey paper because it looked like a setting sun, surrounded by darkness. A fellow scrapper said to her it looked like a target. I found the photograph on the Internet. The journaling on the second page might be hard to read, so I will include it below the layout. 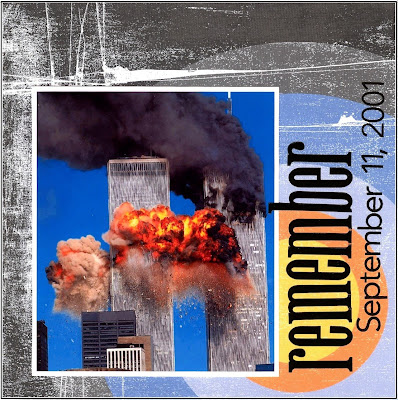 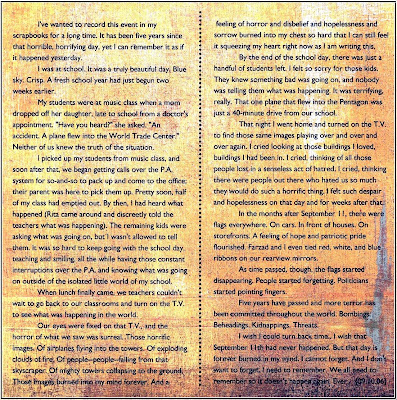 I've wanted to record this event in my scrapbooks for a long time. It has been five years since that horrible, horrifying day, yet I can remember it as if it happened yesterday.I was at school.
It was a truly beautiful day. Blue sky. Crisp. A fresh school year had just begun two weeks earlier.
My students were at music class when a mom dropped off her daughter, late to school from a doctor's appointment. "Have you heard?" she asked. "An accident. A plane flew into the World Trade Center." Neither of us knew the truth of the situation.
I picked up my students from music class, and soon after that, we began getting calls over the P.A. system for so-and-so to pack up and come to the office; their parent was here to pick them up. Pretty soon, half of my class had emptied out. By then, I had heard what happened (Rita came around and discreetly told the teachers what was happening). The remaining kids were asking what was going on, but I wasn't allowed to tell them. It was so hard to keep going with the school day, teaching and smiling, all the while having those constant interruptions over the P.A. and knowing what was going on outside of the isolated little world of my school.
When lunch finally came, we teachers couldn't wait to go back to our classrooms and turn on the T.V. to see what was happening in the world. Our eyes were fixed on that T.V., and the horror of what we saw was surreal. Those horrific images. Of airplanes flying into the towers. Of exploding clouds of fire. Of people--people--falling from that skyscraper. Of mighty towers collapsing to the ground. Those images burned into my mind forever. And a feeling of horror and disbelief and hopelessness and sorrow burned into my chest so hard that I can still feel it squeezing my heart right now as I am writing this.
By the end of the school day, there was just a handful of students left. I felt so sorry for those kids. They knew something bad was going on, and nobody was telling them what was happening. It was terrifying, really. That one plane that flew into the Pentagon was just a 40-minute drive from our school.
That night I went home and turned on the T.V. to find those same images playing over and over and over again. I cried looking at those buildings I loved, buildings I had been in. I cried, thinking of all those people lost in a senseless act of hatred. I cried, thinking there were people out there who hated us so much they would do such a horrific thing. I felt such despair and hopelessness on that day and for weeks after that.
In the months after September 11, there were flags everywhere. On cars. In front of houses. On storefronts. A feeling of hope and patriotic pride flourished. Farzad and I even tied red, white, and blue ribbons on our rearview mirrors.
As time passed, though, the flags started disappearing. People started forgetting. Politicians started pointing fingers.
Five years have passed and more terror has been committed throughout the world. Bombings. Beheadings. Kidnappings. Threats.
I wish I could turn back time. I wish that September 11th had never happened. But that day is forever burned in my mind. I cannot forget. And I don't want to forget. I need to remember. We all need to remember so it doesn't happen again. Ever. {09.10.06}

this is a beautiful and touching post, Debbi. thank you for sharing

As usual your LO is beautiful & your journeling brought me to tears. All the memories came flooding back.
My child was in 5th grade, it was a Tuesday (scout day). I knew when I picked my scouts up from school they would be full of questions. "What do I say? What can I tell them? Will their parents be upset with me?" All these things kept running in my mind & I sat here by myself looking out the window wondering "how could they HATE me sooo much, they don't even know me? How could they HATE us all SOOO MUCH!"
You're so right we are forever changed and we NEED to remember why we've been changed.
Thanks for a beautiful way to remember such a horrific piece of our history.

You have done a beautiful job at this tribute layout of this fateful day. My heart has been heavy today too in rememberance. Love the layout but what touches me most is the journaling. just wow.

OMG! (different subject) I was just hanging out at the pub & noticed that you recently had a Birthday! Happy Belated Birthday! :o) Sounds like you had a blast, can't wait to see all your new pics :o)

a beautiful tribute debbi that just says it for me as well. there are just some things that w/stay w/you forever and this is one of them.

Oh debbie that is a beautiful tribute...love it. I thought about 9/11 all day yeaterday....was a sad sad day.

I was blog jumping and came across your powerful image/page. Your journaling is so powerful! Thanks for sharing.

I recently discovered your blog (which I love btw!) and WOW! this post about 9/11...such a beautiful tragedy that you've created to remember....I'm sure it's touched a lot of people...thankyou for sharing :)