This week's How Much Is Too Much? was especially challenging. Elizabeth challenged us to use 9 stamped images and 4 rub-ons. I love using stamps, but I don't think I've ever used that many on a page before. I used a couple of my stamps for the first time, so thanks, Elizabeth! I hope you'll join me in this fun challenge, and be sure to link your creation to this thread over at Two Peas because the challenge hosts always choose a winner for a RAK.

See that cool "Random Memory" stamp? It's by Catslife Press. They have the most awesome stamps that are perfect for scrapbooking, and I saw a little note on their site asking for feedback on what we might like to see for future stamps, so I e-mailed them and asked if they would make a "Random Memory" stamp, and they did! They actually made two different styles! Later, I asked them to make a stamp saying "Reason No." because I had started a book about reasons I love Farzad, and again, they did!

Isn't that a cute picture of my sister, my cousin, and me? It was taken around 1967. (I'm the one with the red sweater and what appears to be a bucket on my head.) I have no recollection of why we were dressed like that, but I know it was some time around the holidays because there were Gram's plastic poinsettias in that tree in the background, so I used the picture for a random memory. 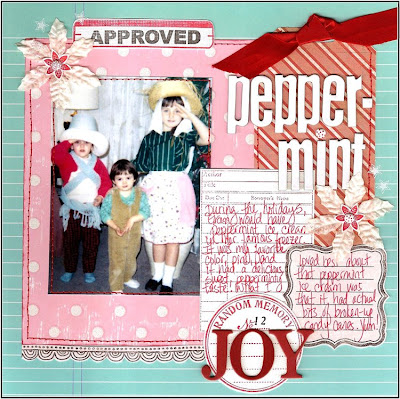 Wow! I love that stamp, thanks for sharing. I'll have to go check them out. Love the memory in your LO, very sweet. :o)

great colors ! this is precious!

love the colors and as usual you rocked the challenge! i love the stamps. and your memory yum!

Once again, awesome work. You are so talented. I just love your layouts!

what an adorable page!!! love the colors here!!! great blog!

Love that you scrapped this adorable photo with a memory of the time and place, but not exactly what was happening. So creative and so beautiful.