If I Could Turn Back Time...

That's our prompt this week at Scrap Yourself. Oh, if only I could turn back time. There are so many moments to which I would rewind the clock. The moment I chose for this challenge is recorded on the back of my layout.

I loved those crazy pink pants. They were my favorites, and I think I might even still have them hiding in one of my closets. I haven't looked for them in a long time, but I think I did keep them in hopes that I would one day fit into them again. So funny because they're way out of style, but when I reach my goal weight again, I swear I'm going to put them on and parade around town in them! 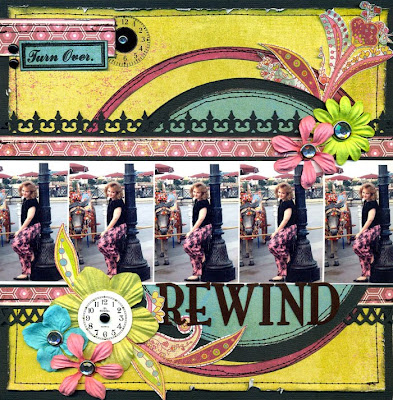 Layout inspired by sketch 58 at Creative Scrappers
My journaling reads: If I could turn back time, I would re-set the clock to the 1980's when this picture was taken. It was shortly after I first reached lifetime status at Weight Watchers. I was at my goal weight and knew the exhilaration of accomplishing a hard-earned goal. I wish I would have stuck with the program and not gained all that weight back because over the years more and more crept on. I wouldn't have spent the last two-plus decades overweight and unhappy with the image I saw in the mirror. I wouldn't have shied away from the camera so much. I would've had more energy and enjoyed my youth more. I wouldn't have spent most of my twenties and all of my my thirties and more than half of my forties fat and feeling old and tired. And I'm finding that now it's so much harder to lose the weight. If I could turn back time, I would set that clock back and maintain the habits I had learned when I'd only had 35 pounds to lose and not over one hundred. {Journaled May 2010...lost 56.2 pounds}

oooooooo i just LOVE this. everything about it. the colors, design and the journaling. good luck and can't wait to see you in those pants. great goal!

I'm in the same boat, trying to remember that hindsight is always 20/20 and not to "should" on myself.

Congrats on the 56.2 pounds lost! Don't forget to celebrate these steps along the way--that in itself is quite a great achievement!

Debbi, I love this layout and your journaling is so heartfelt! Keep up the good work and you'll meet your goal in no time!

P.S. When's the deadline for the DT call over at HMITM? Did I miss that? Thanks! :)

all the days of our life said...

I LOVE this, your journaling is great. Congratulations on the weight loss, I know what you mean is so hard to loose the weight in your 40s. Keep up the good work.

this page is GORGEOUS! I love everything about it- the colors and the design are just wonderful!

I love the journaling too- you just did such a wonderful job with this challenge, and that is what this is all about- scrapping ourselves- the good, bad & ugly. We all have things about us that we don't like or are embarrassed about and your honest journaling is an inspiration to me! Fabulous!!
xoxo~ Zoa

Beautiful layout & what honest journaling. I'm in a similar situation...lost about 40 lbs for my wedding & now I've put back more than 1/2--I'm trying to step back & NOT gain further. I felt so much healthier a year ago!

Thanks for the inspiration!