I'm way late sharing this page I made for our most recent Case File at CSI: Color, Stories, Inspiration. Farzad whisked me off to the beach for a couple of days to celebrate our 32nd anniversary.

I made another layout from my adventures with Tracee. You can see her AMAZING, FABULOUS page here.

I actually had something in mind similar to Tracee's (although not as amazing), where I wanted  the photos meandering down the page and even had envisioned the duck tracks, but it just wasn't working out for me, and I was pressed for time because I had to work all last week, so I decided to go with a grid design. In retrospect (and especially after seeing Tracee's page, I wish I had stuck with my original vision, but in the end, I'm happy I was able to get a layout done at all with the crazy-busy week I had. So here's mine: 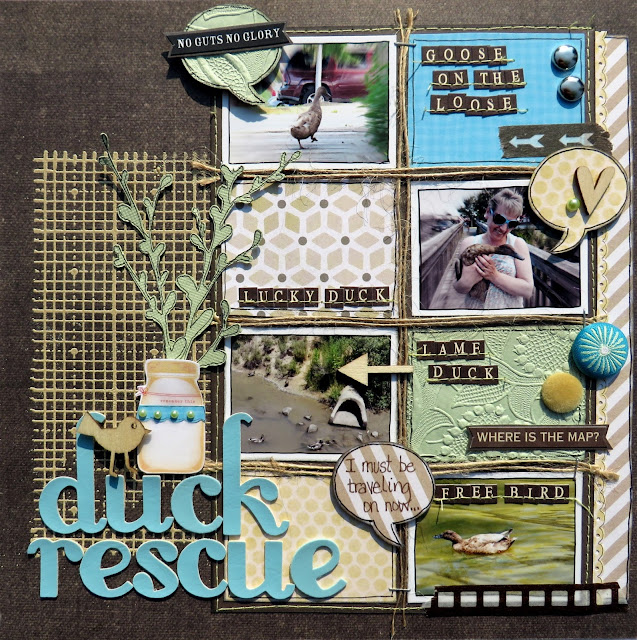 You can probably figure out most of the story from the details on my page, but I'll fill in the blanks here. Tracee and I were on our way to a scrapbook store in another state. I was a little lost driving around the large shopping center, when Tracee noticed a pond nearby and thought it would be a nice place to get some pictures. We were up on a dock snapping away when we noticed this silly duck waddling around aimlessly--up and down the bridge, around the parking lot, and back again, his little beak opening and closing, opening and closing, in a silent quack. Both of us knew he somehow got lost and couldn't get back to his pond, but Tracee was the brave one who ran after the duck and grabbed him. She said his little ducky feet were burning hot from walking on the hot summer asphalt.

Tracee managed to squeeze him back through a narrow gap between the bridge and the fence, and stood on the bridge excitedly waiting for him to waddle down the hill and to the sweet, cool relief of the water. We waited and waited and realized the dumb duck was stuck in a bush (see picture 3). He finally figured out how to get unstuck and waddled the rest of the way to the water's edge, where he ferociously drank a bunch of water before hopping in and swimming away.

Here are some details on my page. Part of what took me so long to get started was the journaling. I instantly thought of "Loosey Goosey" and "Ducky Lucky" and wanted to make up similar rhyming captions for the other two pictures. I never could come up with those, so I moved on, and this is what I came up with. 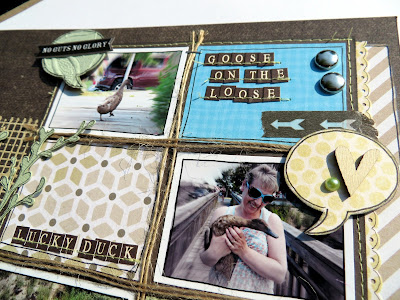 In case you didn't notice, my six-word memoir is a line from Lynyrd Skynyrd's song "Freebird." 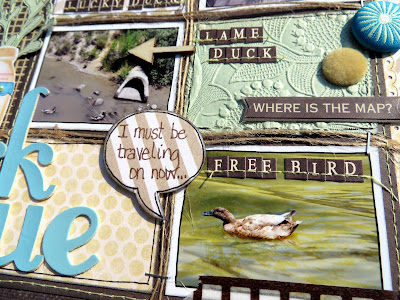 I tried to get a good picture of this jar, but it didn't show up. I covered it with Glossy Accents to look like glass. In addition to using a grid design for the composition of my page, I also used a grid stamp by Studio Calico, used with embossing powder.. 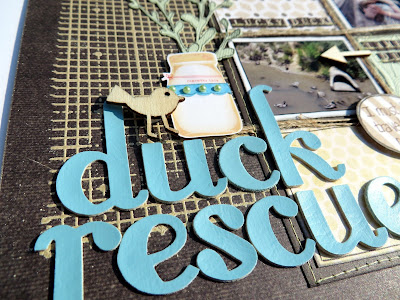 Come see what the rest of the team and guest designers made with this Case File--awesome stuff!

It's wonderful to read about your process and how the page develops a life of it's own sometimes. The journalling flowing from grid to grid is fab and I love the foliage in the glass jar. ?Love the little studio calico bird...I can't seem to find them here in Australia :)

LOL! what an adorable funny page. love hte colors and the design - so much goodies.

Fabulous page to tell the story. Love the squares in the grid design and the twine framing each one. Fab fab.

I like the way your story flows in the grid design... I loved the story when I read Tracee's version too. Sounds like you girls had a riot of a time. Beautiful layout as always.

What a wonderful story and the way you have documented it, love this soooo much.

YOu guys certainly did get up to some adventures! The graphic 'cartoon' nature of the page works really well, I reckon...my & my GF 'rescued' a homing pigeon off our local beach last week...but unfortunately the only pic I got was a bump in the jumper we wrapped it in...& the bloke came to get it in the dead of the night....so no pics there, either. Twas a tad exciting, & fun, I must say, rescuing a feathered friend:):):)

What an awesome story!! I loveeeeeeeee the colors and the grid design!!!!

I love the story of the lucky ducky. Gorgeous grid pattern. I first thought you used burlap...how neat is that stamping.