I wonder if anybody still looks at my blog? It really has been forever--since January that I've been able to post here. Virtual teaching was so incredibly time consuming that it left time for little else. I've been scrapping all this time and sharing on Instagram and some online galleries.
So, today is my debut for the Scrap the Boys team. Here's what I created: 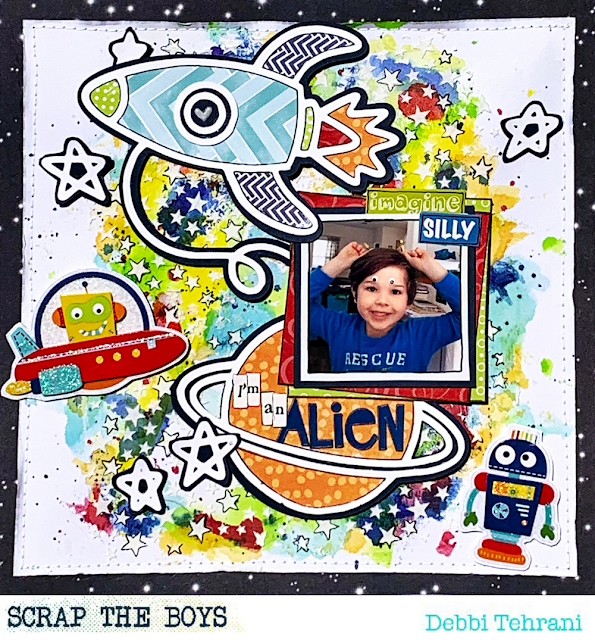 Our challenge this month is all about cut files (if you don't have a cutting machine you can use a cutting die or punches) plus a fab mood board. We've teamed up with Confessions of a Paper Addict (COAPA Cut Files) for this challenge, and I chose the super fun Outer Space cut file to work with. 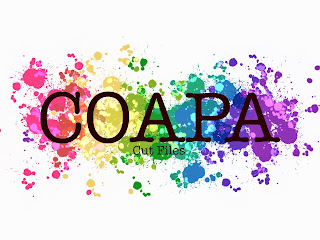 And here's the moodboard: 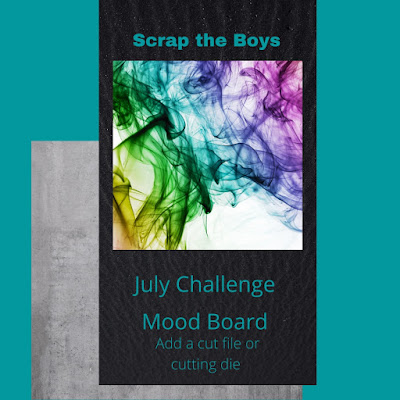 Here are some details. I had the cutest 3-dimensional alien stickers, and I chose the colors for my layout based on them. The moodboard reminded me of mixed media, so I started off by coating some cardstock with clear gesso and using the packaging technique to add watercolor with a bunch of the colors from the stickers.  I used a stencil with texture paste and white paint to add stars. I outlined a few of them with a fine-tipped pen to make them stand out more. 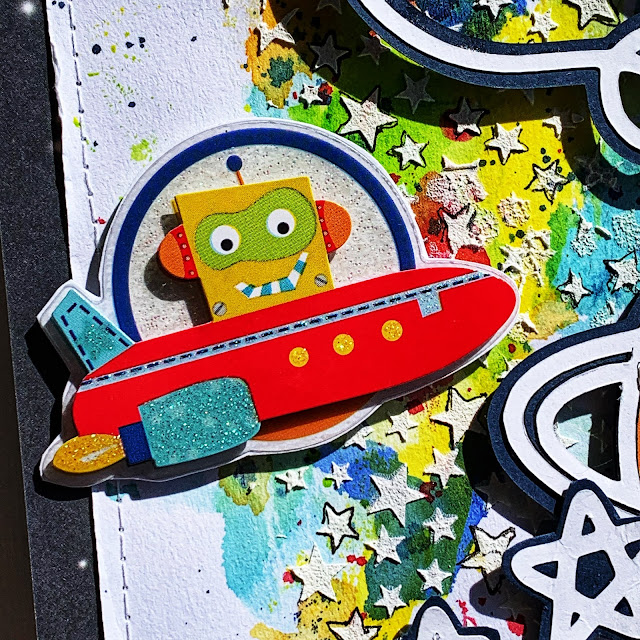 I had the perfect photo of my friend's little boy pretending to be an alien. 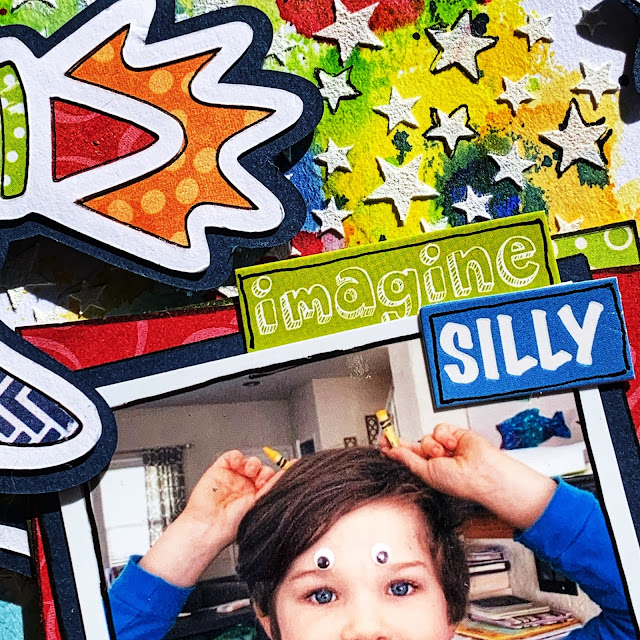 How awesome is this cut file? I cut it out in white and backed it with paper scraps from my stash. Once I laid it on the mixed media background, it didn't stand out as much as I was hoping, so I used the offset tool in Silhouette to cut another copy in navy blue. I originally had envisioned placing the cut file on that starry paper bordering the white paper, but then I remembered I wanted to do the mixed media, and I knew I couldn't make it work on that dark paper, so I decided I'd mat the white paper on the starry paper.
I added a little puffy heart to the window of the rocket because I always add at least one heart to the pages I give away. 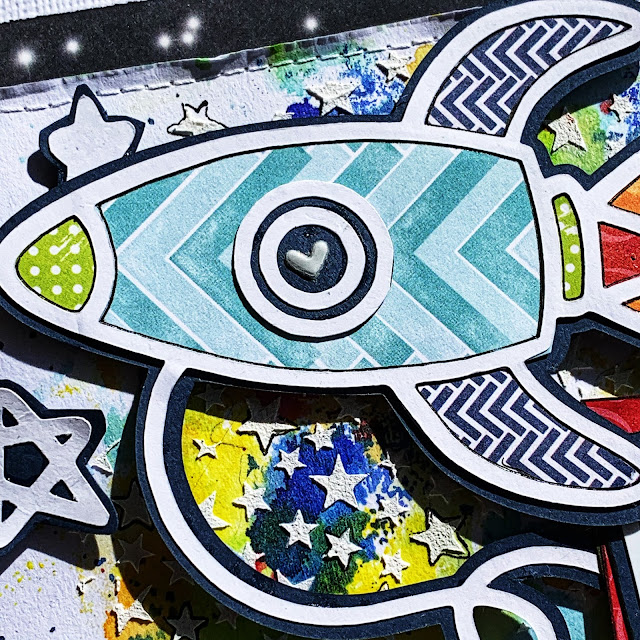 Here's another one of those fun robot/aliens. I hope I can find these again. I think I bought them at Michael's a few years ago. They're so fun and colorful, and they have glitter. They're clear, so I mounted them on white paper and fussy cut them so they'd stand out. 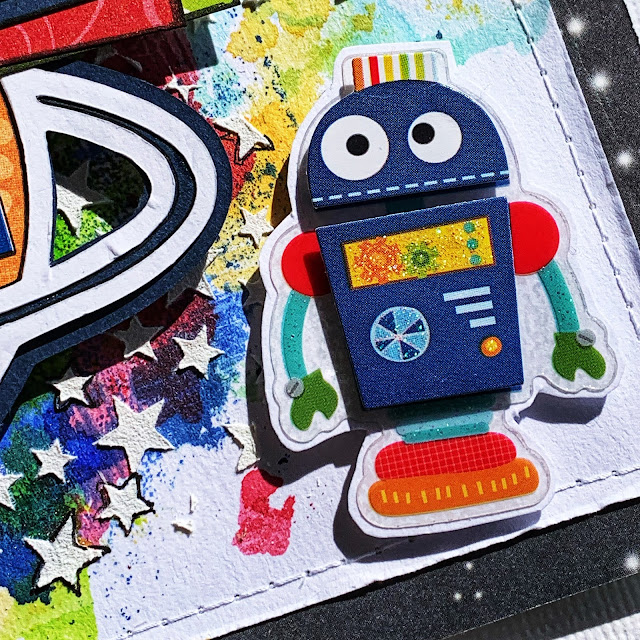 Here's the bottom half of the cut file. I decided to put the title on the planet. I used adhesive foam to adhere the cut file to give the page added dimension. 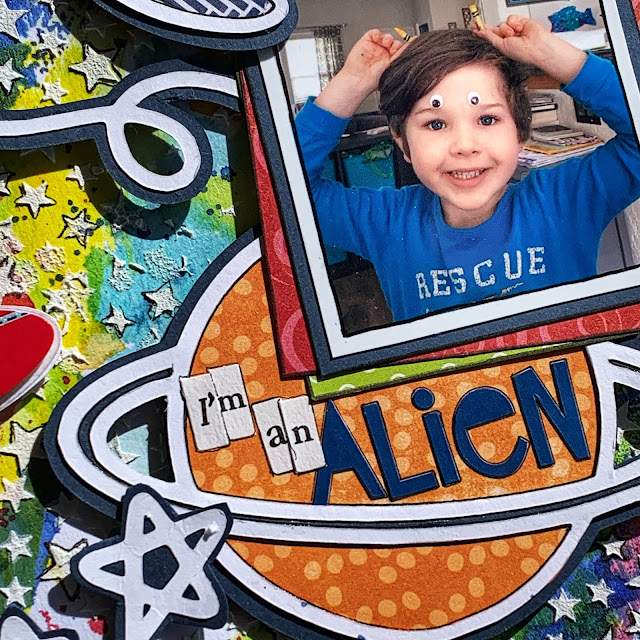 I hope you'll come play along in this fun challenge! Someone will be chosen to be a guest designer for a future challenge!

Absolutely adorable!! Congratulations on making the STB DT!! I can totally relate to not having much time for ANYTHING while my teenage son was doing virtual classes this past year. I had to stay on top of him to make sure things actually got done. He felt like because he was home he could sleep in, play Xbox while class was going on or any number of other things. It's so hard for some kids to do virtual classes because that structure of in person teaching just isn't there. Let's hope this coming school year we have none of those problems!!

Yippie!! I was so happy to see a post by you today. I love your scrapbook pages and have recently come across some alien stickers and you've given me some inspiration to use the crazy things. I was an aide in a similar classroom setting and I know how exhausting it can be at the end of the day. I look forward to more posts at this site - maybe one a month????

When I see someone's blog, I really like it.
Game ស្លត់អនឡាញ