My Weight Loss Journey - How I Shifted My Mindset

I'm sharing this with the hope that I might help others who are struggling in their weight-loss journey. I've been battling my weight problem for decades. I've been on all sorts of diets over the years, from South Beach Diet to the Fat Flush Diet to buying those awful Nutrisystem mail-order meals, to name a few. Mainly I've done Weight Watchers on and off since I was in my 20's--I even got to goal that first time I joined and became a lifetime member.

Unfortunately, that was short-lived. I gained everything I'd lost and then some. That cycle of losing and re-gaining more happened over and over and over again until I'd pretty much lost hope, resigning myself to the fact that I was doomed to stay overweight.

Last year I rejoined Weight Watchers in hopes that it would finally be my year to make it work. I lost 25 pounds over the course of the first half of the year and then gained over 15 pounds back the second half. Sigh. I kept going to the meetings off and on. I'd lose a pound one week, then gain a half the next. I'd often skip weeks when I knew I gained, which was the worst time to not go.

What was my problem? Mostly, I was feeding myself negative messages. I felt sorry for myself. It's so hard. I'd go to the meetings and lots of people were there with a friend or a spouse. I felt all alone and sorry for myself. It's so hard. I hate cooking. I hate exercising. I don't have time to cook. I don't have time to exercise. It wasn't fair that I have fat genes. It was so hard.

The second part of my problem is my perfectionist nature. I'm an all or nothing person. If I didn't follow the plan 100% perfectly, then I felt like a failure and adopted a defeatist attitude that left me saying, "well, I've blown it--I might as well not try." And then I'd spiral out of control for days and weeks and sometimes months.


And then this happened:

My pastor's message struck a chord in me that Sunday. It was the beginning of a great mindset shift in my weight-loss journey.

The next week, I went to my Weight Watchers meeting and asked if I could wipe out my weight-loss history and start over. I needed to reboot.

Partly I wanted to start over because of those 5-pound stars. I had gotten 5 of them the previous year, and I knew it would take forever for me to lose 20 more pounds to earn the 6th one because of all the weight I'd re-gained. Come to find out Weight Watchers stopped giving out the 5-pound stars. I didn't let that get me down, though, because I'm a teacher, and I have my own stars, so that's what I did. I started giving myself a star for each five pounds I lost. As of this week, I've earned my 7th star (which would've been my 9th if I hadn't rebooted). 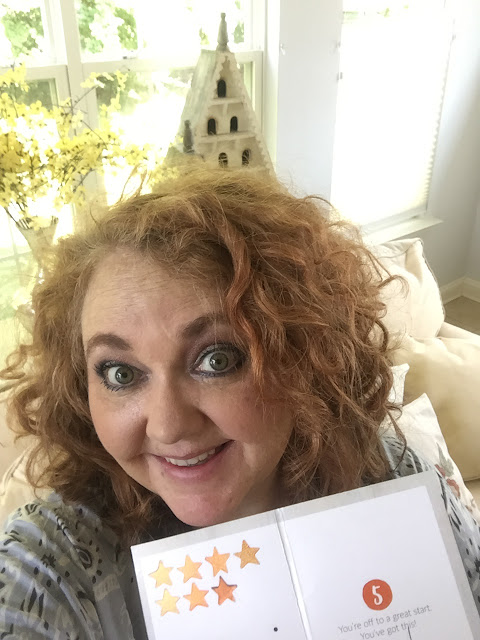 Yeah, I'm a dork like that, but it's a little thing to help me keep aiming for the next star because I have a LOT of weight to lose. Another thing I do to motivate me is this: 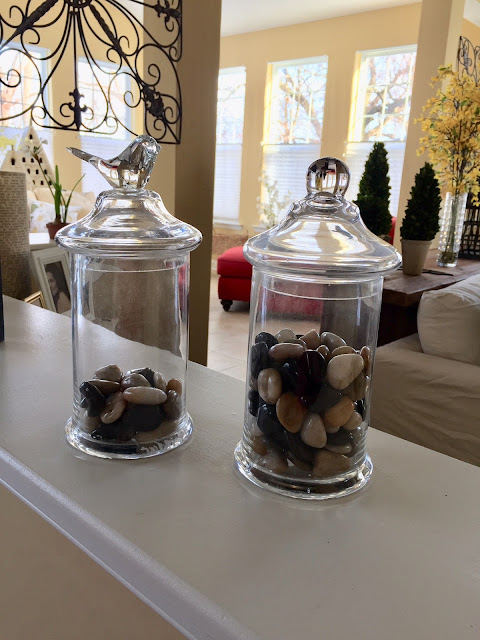 I also do a lot of praying. And asking the Holy Spirit to help me with my self control. When I ask him for help, he really helps me. Problem is, sometimes I don't seek his help, and that's when I fall into the trap of temptations. But it's a journey, and I'm still building new habits to replace the bad ones that have formed over decades. God is helping me develop self-control.

My sister has become a nutrition coach, and she's got a Facebook group and is always posting awesome information about nutrition. She's been a big inspiration to me, as have the other ladies in that group.

One more thing I decided was to make my journey public because I need the accountability. I've been sharing updates on my Facebook page. The encouragement I've been receiving from friends near and far has helped me so much and lifts me up when I'm feeling like my progress isn't good enough.

My friend Laura is a Beachbody coach, and she invited me to join some healthy eating challenges, the latest one was based on the 2B Mindset plan, which I really liked because it's compatible with my Weight Watchers program, both in the food plan and the emphasis on mindset. I bought the plan and now that I'm in Laura's coaching group, she does these 3-week challenges. Laura is incredibly inspiring and encouraging, and I believe God put her in my path at just the right time.

One part of Laura's challenge is to meal plan. Meal planning has helped me so, so much because I know what I'm going to eat and I stick to it. I've figured out Weight Watchers points ahead of time, so I don't have to track. Planning my meals this way has put me in control of my food, whereas before I felt like the food was in control of me. I'm not sure how to explain it. I was constantly thinking about food and what I was going to eat. And when it came time for a meal, if I didn't already have my meal planned, which was usually dinner time, we often resorted to carry-out. So now that I'm planning my meals, I don't run into those problems. I'm eating healthy meals with ingredients that are made by God and not processed foods made in a processing plant. Here's an example of one of my meal plans. (I plan for snacks, but I often don't eat them because I don't force myself to eat if I'm not hungry.) 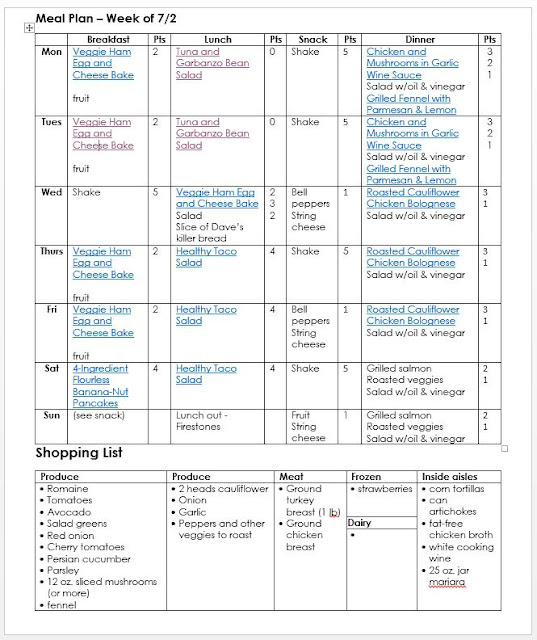 One of my summer goals was to try some new recipes so that I'd have some new things to add to my repertoire. I'm a great one for buying cook books or looking at recipes and saying I want to make them, but then just putting fish in the oven and frozen veggies in the microwave. A steady diet of that is boring. I love food, and I want to enjoy my meals. And forcing myself to try new recipes has made me realize that it's not so bad, and it's so much more delicious and gives me a sense of accomplishment.

Another goal of mine this summer was to start an exercise routine. I'm so out of shape, and I've always hated exercise, but I know how important it is, so I've been pretty faithful at exercising every weekday this summer. I've been either walking my neighborhood for a half hour when weather permits, or doing Chair Gym workouts or Body Groove on days when rain keeps me inside:

I'm not going to lie to you. I've spent many hours this summer arguing with myself, trying to make excuses, and finally forcing myself to get going. One day I literally argued with myself for a whole hour before I put my sneakers on and headed outside. But it's getting easier for me to get started now. I listen to audio books while I'm walking, and I won't let myself listen to them unless I'm walking. To some, my exercise regimen may not seem very impressive or strenuous, but to me, this is a HUGE deal because I'm a very sedentary person and have really not done this kind of exercising for decades. Baby steps.

So, getting back to the mindset thing, My Weight Watchers leader, Joni, has been talking about mindset a lot for a while. She always tells us that the key to losing weight is all in your mind. It's all coming together for me now. I've decided to stop making excuses and stop feeling sorry for myself and instead see this journey as an adventure. A real-life adventure. A real-life journey. There are going to be bumps and potholes and detours. Like when I went on vacation in July and gained 12 pounds in 5 days. In my past life, I would've let that completely derail me, and I'd spiral out of control and avoid my Weight Watchers meeting and probably gain a lot more. But this time, I just chalked it up to a great big pothole and got right back on track. And guess what? I lost almost 10 pounds over the next six days before my meeting the next Saturday, so I was only up 2.2 pounds. And the following week I lost those 2.2 pounds.

Yes, it is hard, but being fat and unhealthy is harder. So is hating the way I look and feel. And constantly feeling hopeless and out of control is hard too. Plus, I am learning that I can do hard things! After all, I've got the power of God behind me!

My journey is slow-going and I have a long, long way to go, but I'm headed in the right direction (I can tack an extra 12 pounds lost to this graph from the year before). 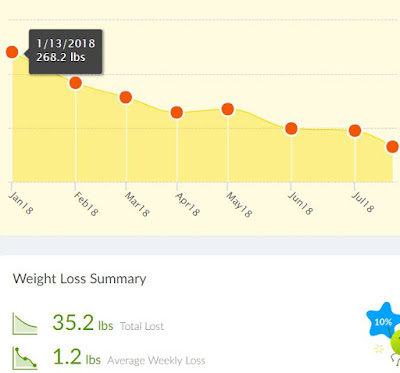 It's okay that it's slow, though, because it's a life-long journey. It's not a race with a finish line. I'm building healthy habits that I will have to keep for the rest of my life, and I want to enjoy this journey.

Thank you for sharing your journey with us. Although I think you're perfect just the way you are, if losing the weight will make you a happier person, I'm right there to encourage you to do so. I wish I lived closer because I'd love to go out for walks with you. Have you ever thought of listening to podcasts while you are out walking? The Scrap Gals is a fun one. I'll be looking forward to future updates. The goal is health and happiness. I know you'll get there.

Thankyou for sharing Debbi, I wish you all the best and yes with God you can do all things... keep going!

You are so inspirational Girl!!!! I’m so happy for you and motivated more to get my act together!

Thanks so much for sharing, I'm in the same boat and looking for that turnaround that will help me get on the losing train. Thanks for your tips.

are everyone looking for ways online to get help solving their pregnancy and infertility problems when most of every native American is talking online about the help of Dr Mandaker Alamun. I checked him out when my husband who could not get me pregnant for over 9 years of marriage as a result of low sperm count became fertile and now, I am 5 months pregnant and it is this man known as Dr Mandaker who helped my husband solve his problem. My name is Alecia from ca USA. I would advise anyone and everyone who needs the help of any spell caster in love marriage,finance, job promotion,lottery spell,poker spell,golf spell,Law & Court case Spells,money spell,weigh loss spell,diabetic spell,hypertensive spell,high cholesterol spell,Trouble in marriage,Barrenness(need spiritual marriage separation),good Luck, Money Spells,it's all he does or looking for breakthrough in your political career to meet this Dr Mandaker the link to his website copy this link (witch-doctor.page4.me)His email contact witchhealing@outlook.com for He is a Reliable and trustworthy. I and my husband have gone to different hospitals having the thinking that I was at fault for not getting pregnant. But at the Federal hospital, they examined him too and his sperm count was low and unable to get a woman pregnant as a result of male infertility. It was then I sort out,thanks to Dr Mandaker.