So Vibrant! So Summery! So Fun!

That's what I said when I opened my July Work in Progress kit (unfortunately, it's sold out--gotta snag these awesome kits early!). I'm so excited to show the layouts I made for my first month designing for Work in Progress. The kit features the new Echo Park Sweet Summertime papers and elements, along with a bunch of other goodies, including some Jenni Bowlin stuff. This kit is perfect for summer pictures!


When I saw that giant balloon sticker, I knew that I had to use it and scoured my brain thinking of the perfect photos to use with it, and I remembered these pictures from a trip to Maine about ten years ago and thought the baloon would be a perfect accent. I mounted the balloon on pop dots and embellished it with brads and a Doodlebug frill. I added a swirly image I found online, made it blue, and cut it out. With three pictures and that great big baloon, I didn't have a whole lot of space for my story, so I kept it short and sweet and made it into a border. I matted everything in black to make each element visually pop out of the page. 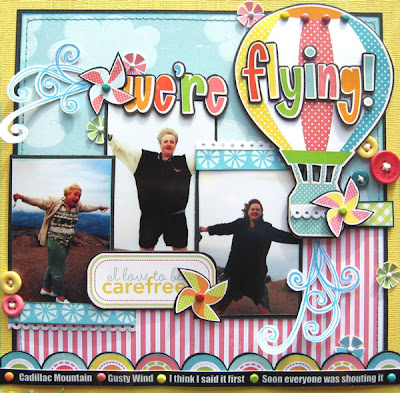 For my next page, I knew I wanted to use the cool sandcastles that Trish included in the kit. And it was perfect because I had to do a beach inspired layout over at Creative Prompts for You. I wished I had some sand to cover the castle, but I didn't want to drive 20 miles to the craft store, so instead, I heat embossed it with some bronze-colored powder. I so wanted to use that awesome Jenni Bowlin die-cut sun paper, but, alas, it was too big for my 8 x 8 pages, so I cut it in half and cut out the sun and added machine and hand stitches. I just love the little pinwheels in the Echo Park paper! Trish also packed some cool corrugated paper into the kit. I sanded it to give it a bit of a weathered look. 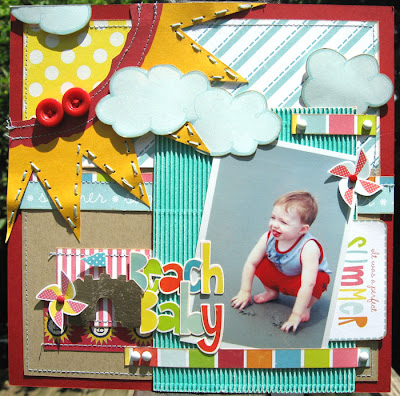 I found this fun picture in my stash and thought that colorful outfit my Gram was wearing would go well with the colorful papers. That tree is gigantic and so fun. I embellished it with circles punched out of one of the Echo Park papers and stitched on some tiny buttons. 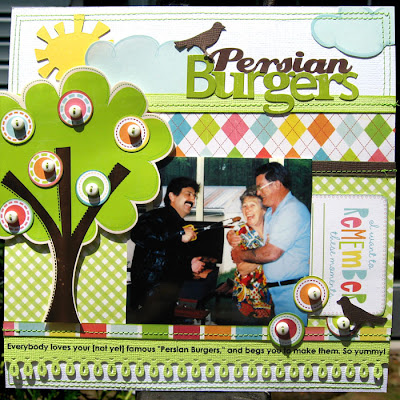 Here's the fourth layout I made. I knew when I opened the box that I wanted to use this cute picture of my Gram sitting under an umbrella picnic table on my sister's deck. There was this cool burlap in the kit, and  the frayed edges reminded me a little of that fringe on the umbrella. The fun banner came on the sheet of Echo Park stickers, as did the sun. I wanted to use that sun and some more of the cloud paper, but I wanted to save some of the clouds, so instead of using a big piece of it, I tucked a small bit behind the top layer and folded back the edge and had the sun peeking out. That pretty yellow butterfly is from the kit, too--Jenni Bowlin butterfly banner (the yellow letter stickers are also in that set). The pinwheel patterned paper made me think of making a pinwheel accent, which looks fun with the double-sided paper. 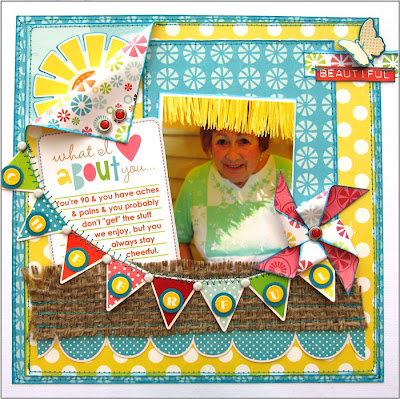 For my last page, I wanted to show that you could get a whole different look than the vibrant summery ones I made. The green and yellow papers are both Echo Park, and I used some of the Jenni Bowlin paper (the red with the suns). I made the flowers with these cool fabric strips that Trish included in the kit. The brown background is Core'dinations paper, sanded, which I had bought from Work in Progress a while back. 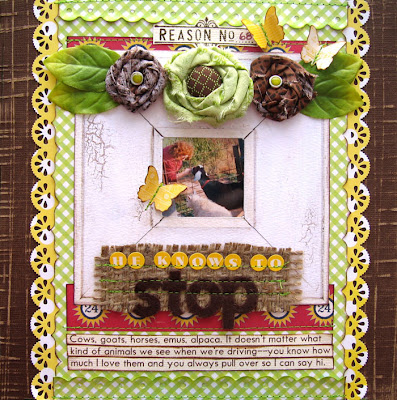 This page was published in Scrapbook Trends.
I still have a TON of stuff leftover from this awesome kit, and I'm saving it for summery pictures I will take over the next two months!

Wonderful layouts! I just love the air balloon, big sun and clouds, the flag banner, and the fabric flowers. So cool.

What awesome layouts!! Love your pictures and how you tell the story. You are VERY creative.

omg! what an awesome kit and you so rocked it!!! dang. too bad its sold out but i can so see why!! i absolutely love everything about all your projects. everything is big bold and bright.