Case File No. 20 is open for investigation at CSI: Color, Stories, Inspiration, and what a fun one it is! 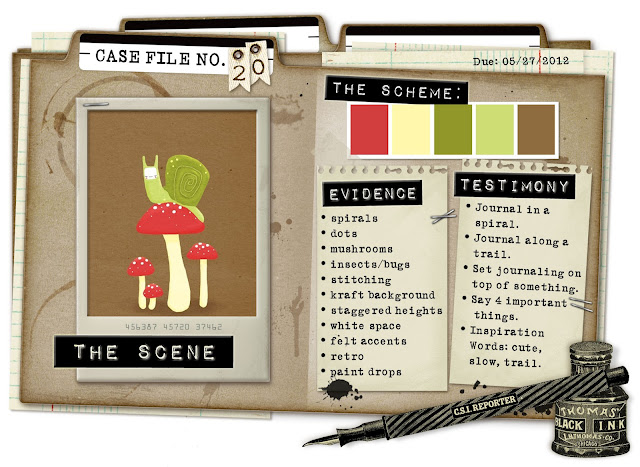 And Michele's printables are just irresistible! 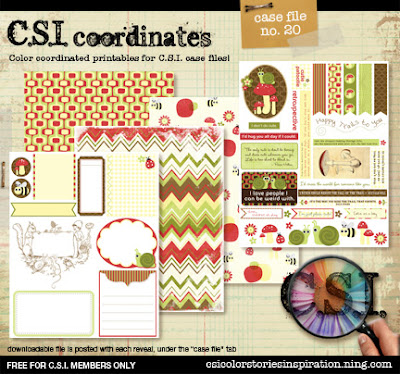 I had a million ideas floating around in my head. I had originally intended to go with the "retro" angle and scrap some pics of me and my sister from the 1970's, but then I had another brainstorm.

We moved to a new house back in November, which meant 20 added minutes to my daily commute. I was a little worried that I would find it a drag, but I've discovered that I love, love my commute. There's virtually no traffic. I drive along country roads, waving good morning to the cows and alpacas. And I cross through a tree farm as part of my commute, and I love that part of the trail, so I decided I'd scrap that.

I couldn't for the life of me get a great picture, but here it is... 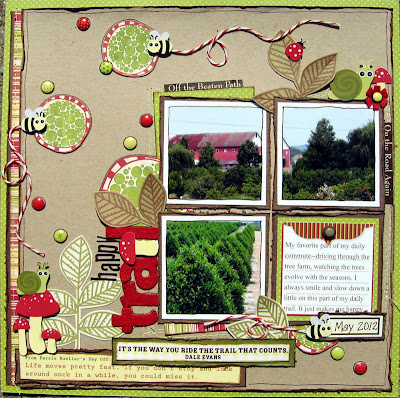 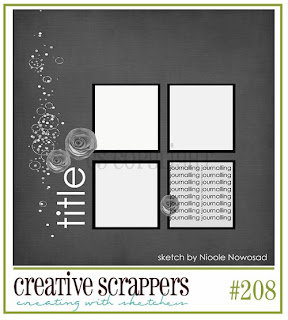 Here are a few closeups. I just adore the little snails and toadstools that Michele made for us! The quotes are in the CSI Coordinates, to. Those leaves (and actually all of the paper) are by Scenic Route. 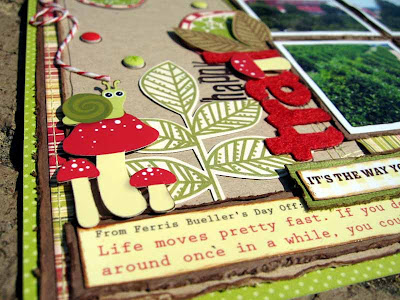 Those circles are from a Scenic Route paper--one of their Christmas collections, believe it or not.  And those dots are by Heidi Grace. They're called metal dots, and I think they're so cute. They sit on a little pop dot. I originally didn't have stuff outlined, but I felt my layout need a little something, so I added some brown pen outlining to the metal dots and the circles. Just added a little more definition. 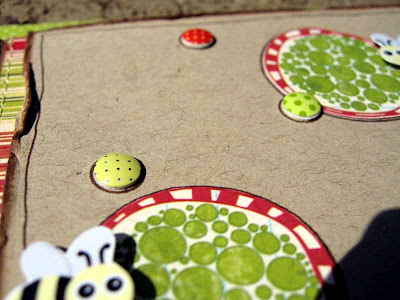 I used one of the toadstools as an i in my title. My friend Tracee helped me me with a few things as I agonized over the placement of everything. I originally had different brown letters for "happy," but they were a little too big, and Tracee suggested these little Lily Bee letters that I had forgotten about. (Thanks Tracee! xoxo) 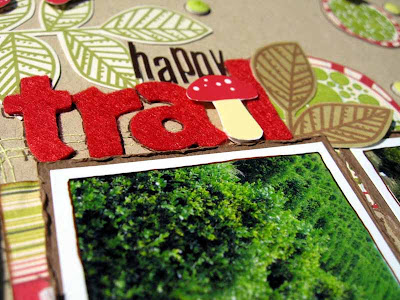 There are little ladybugs in the Coordinates, too. I printed my bits out on glossy photo paper because I wanted the colors to be saturated. When you  use cardstock, the paper absorbs some the ink and the colors come out a bit lighter. 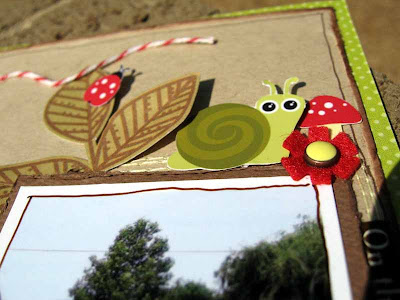 At the last minute, I decided to add bee trails with baker's twine. Aren't those bees adorable? They're also in the printables. I also added the bits of patterned paper behind the photo squares and the 7 Gypsies stickers at the last minute. 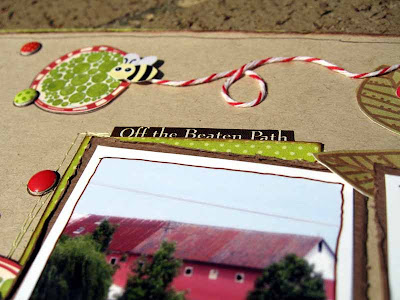 I say it every week, but you MUST go see what the design team and guest designers did with this fun Case File! It just blows me away every week how everyone interprets the same case file in so many different ways! If you haven't yet had time to play, you have this week and next week's challenge to play for a chance at winning an awesome kit from C'est Magnifique.

Wonderful and so creative Debbi - I really need to try Michelles coordinates - you used them perfectly. Just the right little bits and beautiful photos. Makes me miss the east coast. :( Thanks again for having such an amazing and awesome challenge site. I really enjoy working on the next challenge and see how everyone interprets it! Hugs!
Tina

That is sooo stinkin freakin cute. I love all the embellies they are so much fun!

LOVE LOVE LOVE Debbi! Love your story. I love especially since I can envision you driving those back roads. Smells like home home to me! I love the close ups on your blog- all the little details that are hard to see in the CSI gallery!

Great layout! Love the colors, and the embellishment is gorgeous!

This is adorable. I love the whimsy of the mushrooms and the snails...so very cute.

Aahh didn't know your new house is in the country side, my gosh what a lovely commute you have! mine is on a buss and the subway for an hour ... This really is so very cute! Michele's coordinates are just PERFECT!! love how you've used the toadstool in the title and all the fabulous bits and bobs that you always conjure up from your treasure trove! An absolutely darling whimsical page to adore! xoxo

Love this! The circles in the back look fab and I like what you've done with the sketch. The pics look very nice laid out in the lo like this!

This is amazing! You have managed to do so much and it looks so fab!!! I have to play along with CSI - I keep meaning too! TFS! :D 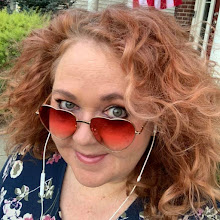