Case File No. 38 is open for investigation at CSI: Color, Stories, Inspiration! In case you haven't heard, CSI is teaming up with Once Upon a Sketch for a super-duper, double-the-fun, scrap-a-licious set of challenges in September. Here is our Current Case File, which features one of Nadia's fabulous sketches: 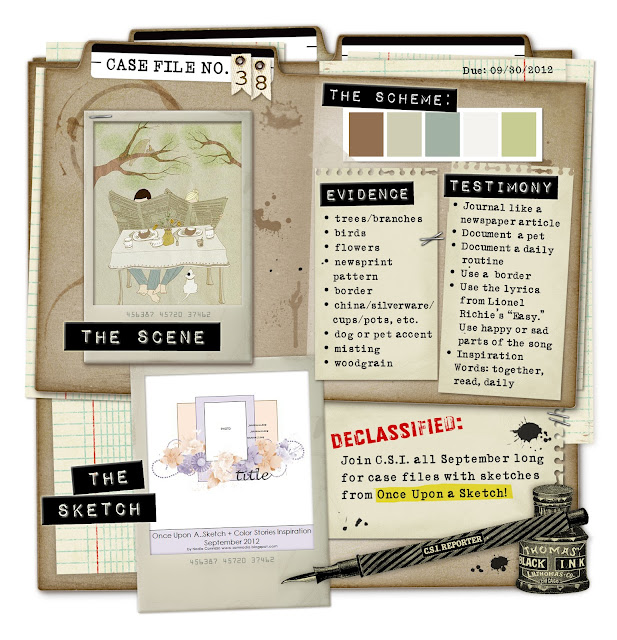 I have to preface this by saying I really don't like my page. I contemplated not including it in the reveal, but I worked so hard on it. My friend Tracee tried to get me to articulate why I don't like it, but I couldn't quite put my finger on it other than to say I just don't like the way it looks.

Anyway, here it is: 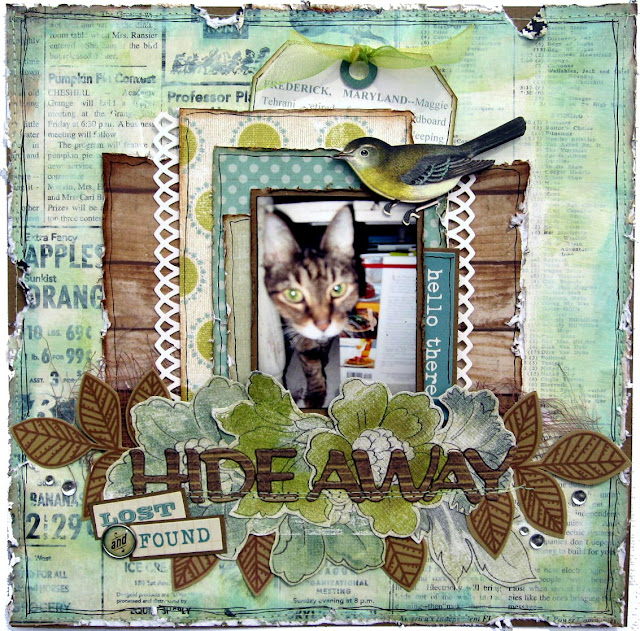 So, I decided to jump into the gesso craze. I've had a pot of it for a couple of years, sitting pretty much unopened. I wanted to use the newspaper pattern that was part of the Evidence in the Case File, and I remembered an October Afternoon paper, but it had a sort of cream background that I thought would clash with the off-white in the palette. Here's the paper that I started with: 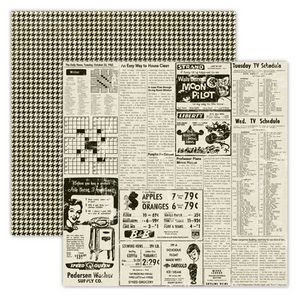 So, I smeared gesso all over it with a used gift card, let it dry, and then rubbed teal, green, and brown ink all
over.

I wrote my story like a newspaper article and tucked it behind the layers on a tag, mainly because I didn't have space. (Yeah, the placement of that bird is one of the many things I hate about my page--if I hadn't stitched everything down, he would've been sitting up higher, on top of the photo, but I couldn't move him because then he'd get stuck on the removable tag and cover up my writing. ) 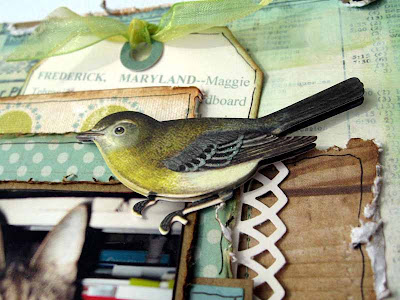 Here's the story: FREDERICK, MARYLAND--Maggie Tehrani retired from her cardboard Costco box and found a new sleeping spot, Farzad Tehrani informed Debbi Tehrani this morning. Maggie was spotted sleeping behind the cookbooks on the bottom shelf of the kitchen console table. When Debbi Tehrani attempted to photograph the sleeping cat, Maggie awoke and tried to make a quick exit. Debbi snapped a blurry photo of the sneaky feline just in time. "It's almost impossible to photograph Maggie," reported Debbi, "She's very camera shy. As soon as she knows you've got a camera, she's on the move."


Maggie has a history of changing sleeping spots. She tends to like closed-in spots. Baskets, shopping baskets, shoeboxes are a few of the containers Maggie has snuggled into. More recently, a Costco box, the space between the kitchen stools and the island, and now behind the cookbooks, are a few of Maggie's favorite spots in her new home in Frederick. "This morning, Maggie couldn't be found," said Pejman, nephew of Farzad Tehrani. Perhaps she's found a new hiding place.

As I was looking for embellishments, I found these Colorbok word stickers that said "lost" and "found" which were the perfect color for my page, and then I luckily found a brad that said "and" in the right colors too. I love when that happens! 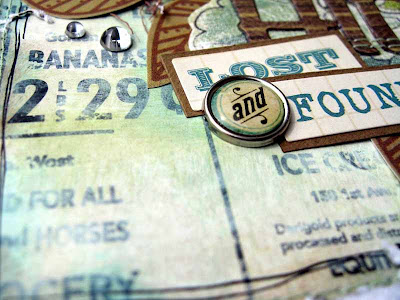 The flowers as well as the circle paper are old Wild Asparagus papers. The brown leaves are cut out of an old Scenic Route paper. The letter stickers are by Crate Paper, and I chose them because they have a woodgrain look, that was part of the evidence. I tucked some scraps of dyed cheesecloth that were sitting on my scrap desk to give my page a little more texture. I added those shiny clear dots at the last minute when I was lamenting how much I didn't like my page--I was in a desperate search to add something to make it better. :( 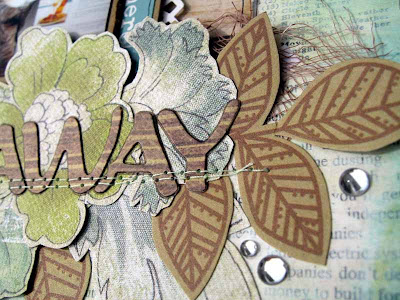 So there you have it. My unsatisfying layout. I'm happy I got to document this story. But I have a feeling this will be one of those pages that will get an "extreme makeover" some day.

Please go check out what the rest of the design team and our guest designers did with this Case File. Awesome stuff in this week's reveal, as always! And don't forget we have a design team call in progress, so solving this week's Case File will be a part of your application.

Thank you so much for stopping by my blog and reading about my page.

Email ThisBlogThis!Share to TwitterShare to FacebookShare to Pinterest
Labels: Cats, CSI, My Mind's Eye, Old Stash, Once Upon a Sketch, Sketches

That is so gorgeous! I love this:)

This is GORGEOUS!! I love love love the colors, the wood grain, and loveeeeeeeeeee the leaves and flowers!!!

Hmmmmnnnn....interesting - if you hadn't said anything I would've just gone - bit different to her usual style, but I LOVE that flower border behind the title & those layers are awesome & the colours are perfect....but now I see it with your eyes....& I get why the bird annoys you there...but apart from that? I really, really like it:):) Shame you don't!!!!

Strange, Debbi! I thought your page looked real cool on the reveal wall. Anyway, it is said that discontentment is always good for an artist. Love the story in the third person.

HI Debbi
Great layout! Thanks so much for stopping in to my first Guest Designer layout. I will diffinetly check out CSI Sounds interesting!
Sherry P

I think this is a fabulous page Debbi! I especially like your background work, he he once you start with gesso you will certainly not have a jar sitting on your desk very long :)) Always love a good reading and your journalling is a really fab one! Thank you for sharing your page with us at OUAS! *giggling*

HI.. I really loved this when I saw it.. I love the wood framing the photo, the leaves look great and the story behind it is special.. I like it.. and wouldnt change anything about it~!

Wow! This looks fantastic Debbi! I simply love the colour combo and gorgeous design. One of my favourites of you. :)

I also really loved this layout when I spied it and came in for a closer 'look'..... the elements you have used are amazing together, the stitching... bird, and such an adorable photograph. I hope you'll feel more at peace with your layout with all the wonderful feedback you have had...

Well, I absolutely love your page, Debbi! And I always love reading your stories, too. Your kitty is adorable. Love the newspaper style story for the journaling. Your gesso background is fabulous. Really love it mixed with the torn edges and woodgrain patterns. And way to rock the old Scenic Route and Wild Asparagus. I still have that paper, too. You always inspire me to look at my old stuff with new eyes. :)

Everything about this layout is gorgeous. The color, the layering, the title. I love it Debbi.

As usual a deliciously gorgeous LO, my only observation would be that perhaps you need a 'third' object to draw the eye in, something small to the left of the photo, when I put the cursor there it drew your eye to photo, which perhaps is what your missing....but still an amazing page...

Gorgeous, Debbi. Love the fussy cut flowers and leaves. Thanks for playing with us at OUAS.

I just love the pretty details - and your story!

Thank you for sharing your page with us at OUAS!

LOVE the gesso! Looks great to me - we all have the pages that are not our ultimate faves but I just put it down to 'another one in the album" & move on!! This page has some lovely touches - the stitching etc & the leaves and alphas are way cool!

Love your use of gesso-and r4eally the placement of the bird is fine-you're just very picky!! _I guess we all are with our own pages!

OH, my! This is just gorgeous! I love this page. And the bird is perfect! Thanks for joining us at OUAS!